In an effort to interpret history through a Christian lens the evangelists sometimes indulge in anachronistic portraiture of Jesus; that is, they retroject the experience of the believing community back into Jesus’ ministry.

John’s depiction of Jesus as a master of extended discourse and debate, for instance, is more reflective of the late 1st century Johannine preacher and his conflicts with the synagogue than of the rhetorical style and concerns of the historical Jesus.¹ The mass conversion of Samaritans during the ministry of Jesus with the woman at the well constitutes another case of imaginative foreshadowing (John 4:39-42, cf. Luke 9:51-56, Acts 8:4-8).

Anachronistic stories about Jesus can also look forward beyond the evangelist’s lived-experience and into a desired or expected future. This is the case, I would argue, with the symbol-laden exorcism of the Gerasene demoniac. The narrative functions as an eschatological allegory. It depicts what might happen, or what early Christians hoped would happen, when Jesus prevailed over the empire at his coming. What would become of the pagan system and those gentiles bound up in it when the kingdom of the world became the kingdom of God?

The corruption of the gentiles

At the center of this allegory stands the Gerasene man possessed by the demonic Legion. In his demonized state he represents those gentiles living under pagan domination, particularly the Greco-Roman variation. As the host of imperial power he is herculean: he breaks all bonds and cannot be restrained. Yet he is, at the same time, wild, self-destructive, and unclean. Like an utterly defiled Israelite he haunts tombs in the night among the swine of the hillside (Isaiah 65:4, cf. Mark 5:5; 11), naked and out of his mind. This demoniac, as the author of the Apocalypse might have thought, typifies those gentiles deceived and poisoned by the sorcery (φαρμακεία)² of the pagan world (Revelation 18:23). He suffers as one drunk on the wine of Babylon’s fornication (Revelation 17:2), possessed by the “unclean spirits” that secure Satan’s grip on the nations (Revelation 16:13-15).³

The healing of the nations

When the Gerasene man is at last healed and the Legion is expelled into the sea, he comes to represent Greeks cured of idolatry and relieved of its symptoms (cf. Revelation 22:2). Like the nations liberated from the power of the old gods, freed from slavery to the elementary principles of the world (Galatians 4:3), the ex-demoniac apprehends the God-given faculties of mind and body (Mark 5:15).⁴ In him, the scepter of pagan spiritual power, and thus pagan political power, is broken proleptically. The gentile can now freely subject himself to God’s servant, the one appointed as lord of the nations (Mark 5:18-20, cf. Romans 15:11-12, Luke 2:30-32).⁵ The formerly-demonized Gerasene can “beg that he might be with” Jesus as a disciple.

The undoing of pagan civilization

This deliverance of the gentile wrought by the destruction of Legion also brings judgement upon those who refuse to abandon the defunct pagan order—and herein lies the source of the people’s anxiety and of their request for Jesus to relinquish the territory (Mark 5:14). Those gentile townsfolk who respond to the Gerasene “seated and in his right mind”⁶ with trepidation do so because the pagan system upon which they rely has suffered a symbolic defeat: that is, Rome’s days are now numbered. Jesus’ reign over the Decapolis is at hand.

Yet those who are willing to confer their allegiance to Jesus and not Caesar, “marvel” at the news brought in and by the restored Gerasene (Mark 5:20).

For both of these groups—frightened gentiles and amazed gentiles—the gospel proclaimed by the demoniac-turned-apostle is simply this: Rome’s back is broken; Jesus has thrown his Legion into the sea.⁷

The ramifications of this gospel would have been clear to Greek hearers. Since the spiritual forces behind or in Jesus, whatever they might be, have proven greater than those spiritual forces propping up the Roman empire, pagan civilization is set for collapse and a new order headed by Jesus will soon take its place.

For Mark and the early Christians, this central hope of Christ’s victory over the paganized world at his parousia was dramatized in the legend of the Gerasene demoniac.⁹ The exorcist who once crossed the waters and disposed of the demonic Legion would one day cross the skies and cast down the idolatrous empire. 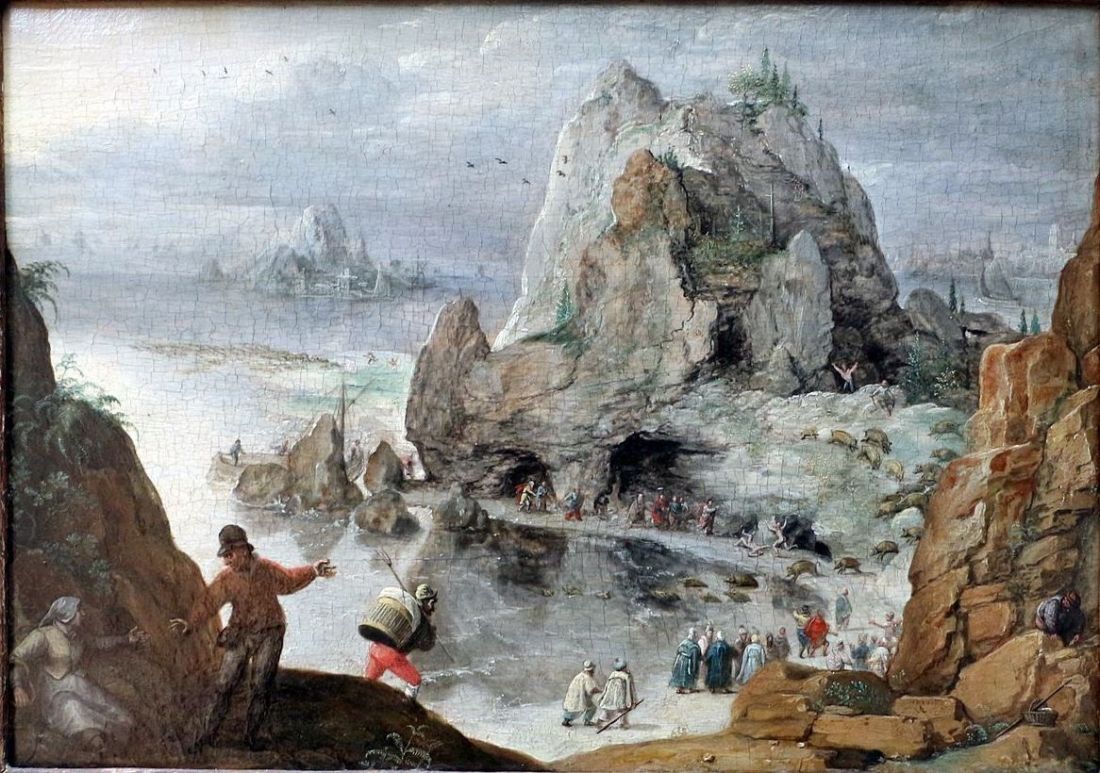 1—The Synoptic Jesus speaks mostly in cryptic parables and pithy sayings. Even in the Sermon on the Mount, a Matthean creation, Jesus engages in thematic paraenesis, not discourse. See Louis Martyn’s History and Theology in the Fourth Gospel.

3—This text associates nakedness with deception by demons and accommodation to pagan empire.

4—In a typical Jewish polemic Paul has this to say about the corruption of the pagan mind: “Though they knew God, they did not honor him as God or give thanks to him, but they became futile in their thinking, and their senseless minds were darkened. Claiming to be wise, they became fools; and they exchanged the glory of the immortal God for images resembling a mortal human being or birds or four-footed animals or reptiles” (Romans 1:21-23, cf. Wisdom 13-15).

6—Mark here redundantly designates the ex-demoniac as “the man who had the Legion.” He does so in order to stress that the townsfolk know precisely which demoniac sits before them.

7—Although Jesus commands the Gerasene to proclaim whatever⁸ “the Lord [God]” (Mark 5:19-20) or “God” (Luke 8:39) has done for him, he instead proclaims what “Jesus” did. As I considered in a previous post on Apocalyptic Trinitarianism, this slight modification of the gospel from news about Israel’s God to news about Jesus represents a typical pagan perspective. Faced with the sudden overthrow of pagan (i.e. demonic) spiritual and political power by Jesus, the gentile praises Jesus not as the servant of Israel’s God, but as a deity in himself. The gods that stand behind Roman influence have been undone by a higher god: Jesus Christ.

8—Literally “all the great things.” The plural hints that the ejection of Legion from the one man has symbolic import for all gentiles.

9—An historical event from the ministry of Jesus may well stand behind Mark 5:1-20. But whatever the primitive version of that story might have looked like, Mark has appropriated it for the cause of his eschatological vision.

11 thoughts on “The demonized Gerasene and the paganized Greek: eschatological allegory in Mark 5:1-20”