God created man for incorruptibility and he made him to be the image of his own being. But by the envy of the Devil death came into the world, and those of his party are testing [man]. (Wisdom 2:23-25, my translation)

Written anonymously some time during the 1st century BCE, the Wisdom of Solomon seemingly attests what would become a popular Jewish and Christian belief: that it was the Devil (i.e. Satan), not a mere serpent, who tempted Adam and Eve in the garden. If this long-held interpretation of the text is correct, Wisdom 2:24 constitutes our earliest witness to the Satan-serpent connection, predating the New Testament by a century. Seeing as Wisdom was well-read and well-liked by the earliest Christians, this would have played an important part in their understanding of Satan.

Dr. Jason Zurawski contests this reading of Wisdom 2:24, however, in his paper Separating the Devil from the Diabolos: A Fresh Reading of Wisdom of Solomon 2:24. Zurawski maintains that the Devil, in as much as he is an angelic personification of evil, does not fit into the worldview presented by Wisdom. He writes:

For the author of Wisdom the world was created and is managed by divine Wisdom, and every individual is able to find Wisdom and live according to her laws. This type of world has no room for demonic, anti-divine forces. Therefore, when the author decided to speak of a diabolos’ envy, it would seem that he had in mind something other than a disgruntled angel.

Looking at the history of the usage and meaning of the Greek term διάβολος, both in Jewish and non-Jewish texts, we see that, despite later apocalyptic use of the term to signify an anti-divine angelic adversary, our Alexandrian writer would have more naturally used the term as a means of indicating some kind of human opponent…

Within this context, 2.24 was intended to describe the continual state of the cosmos, not a single cosmos-altering historical event. Although the author of Wisdom would have likely viewed both the serpent and Cain as adversaries who test humanity, they are but two of many throughout history, and their actions in no way affected humanity’s natural state—bodily mortal, spiritually immortal. Only the individual is able to change this constant and only for him/herself. There can be no primordial devil or contemporary demon which brings about this change against humanity’s will. (397, 399)

Zurawski thus declines to identify the διάβολος of Wisdom 2:24 as a specific figure from Biblical history. He considers it better to envision this devil as the perpetual “adversary” of the righteous, as the scoffer who constantly tests the faithfulness of the just man. It seems the author of Wisdom has extrapolated from his own witness to the persecution of the righteous (detailed in 2:1-22), that death originally came into the world through the jealousy of the unscrupulous (2:23-25). No particular evildoer is in mind.

Primeval history according to Wisdom

In addition to Zurawski’s proposals, I think there is another reason to doubt that Wisdom 2:24 alludes to the story of Adam’s fall. For one, Wisdom 10 presents Adam and his transgression in too optimistic a light, and secondly, Wisdom locates death’s source elsewhere.

Wisdom protected (διαφυλάσσω) the first-formed father of the world, when he alone had been created; she rescued (ἐξαιρέω) him from his transgression, and gave him strength to rule all things. But when an unrighteous man departed from her in his anger, he perished (συναπόλλυμι) because in rage he slew his brother. When the earth was flooded because of him, wisdom again saved it, steering the righteous man by a paltry piece of wood. (Wisdom 10:1-4)

Far from ruined by the Fall, Adam is “rescued” from his sin and is empowered to rule all things as he was originally intended (cf. Genesis 1:26).

Unscathed by his mistake, Wisdom’s Adam is contrasted with his son Cain, an “unrighteous man.” While Adam was delivered from his transgression and its consequences because he found Wisdom’s favor, Cain, unprotected by Wisdom, “perished” on account of his sin. While Adam went on to enjoy his dominance over creation, upon Cain’s shoulders was placed the blame for the annihilating Flood.

So, taking into account Wisdom’s indifference to supernatural evil, its benign reading of Genesis 1-3, and its brutal censure of Cain, I would argue Wisdom 2:24 is best read as an indictment against Cain and all those like him who in envy murder the righteous. It is through their jealousy that death entered and enters the world. 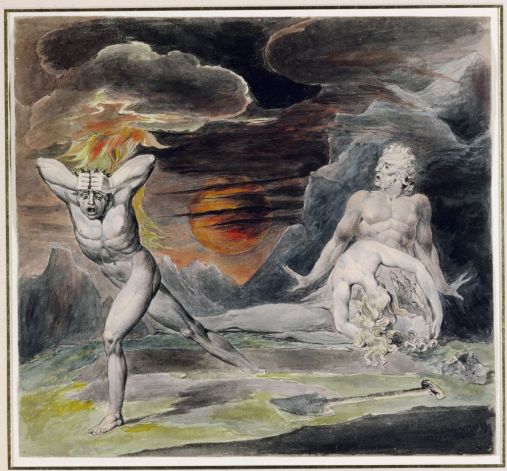 Did early Christians read Wisdom 2:24 in this way? Unfortunately, no New Testament author mentions the text. The earliest commentary (Christian or otherwise), however, is found in Clement’s first epistle, dated AD 96. In explaining why believers are persecuted Clement writes this:

All glory and enlargement was given to you… For this reason jealousy and envy, strife and sedition, persecution and tumult, war and captivity come [upon you]. By such things men were stirred up, the mean against the honorable, the ill reputed against the highly reputed, the foolish against the wise, the young against the elder.

Thus righteousness and peace stand aloof, since each man has forsaken the fear of the Lord… going after the lusts of his evil heart, seeing that they have conceived an unrighteous and ungodly jealousy, through which also death entered into the world.

For so it is written, And it came to pass after certain days that Cain brought of the fruits of the earth a sacrifice unto God… while they were in the plain, Cain rose up against Abel his brother and slew him.

Quoting Wisdom 2:24, Clement argues that envy directs the evildoer upon his path—particularly in his ungodly pursuit of the righteous. The glory that believers possess and await make them a natural target for such jealous and violent men.

In the midst of this argument Clement comments specifically on Wisdom’s phrase “death entered the world.” Rather than turning to the story of Adam, Eve, and the serpent, Clement appeals to the story of Cain and Abel. Having retold the tale, Clement circles back to his initial claim taken from Wisdom 2:24, repeating the point: “unrighteous and ungodly jealousy, through which also death entered into the world… jealousy and envy wrought a brother’s murder.”

As it stands then, Clement appears to have viewed Cain as the original jealous “adversary,” the one identified in Wisdom 2:24. For him, Cain, not the serpent, was the διάβολος through whom death came and through whom the righteous were slain.

Lacking further evidence, many Christians of the 1st century probably interpreted Wisdom 2:24 in a similar fashion. The only devil they found in this text was Cain.

5 thoughts on “When Cain was the Devil”

Field notes on Christian origins for a post-Christian world