In my last post I argued that the early Christian portrait of Satan as a serpent (cf. Revelation 12-13, Luke 10:18-19, Romans 16:20) was primarily built upon the ancient Near Eastern Leviathan myth as appropriated by the writers of the Hebrew Bible (cf. Isaiah 27:1). I conceded, however, based largely upon Wisdom 2:24 and Revelation 12:9, that Eden’s conniving serpent may have also influenced early Christian perceptions of Satan. For, in Revelation 12:9 Satan is referred to as “that ancient serpent… the one who deceives the whole world.” At first glance, this appears to be a clear reference to the serpent’s deception of Eve and Christians throughout history have no doubt taken it as such.

Still, I’d like to test the strength of the Satan-serpent consensus: Was Eden’s crafty snake really the Devil himself? Did the first Christians think so? I’m not so sure.

A snake is a snake

With the possible exception of Revelation 12:9, no Old or New Testament author explicitly marks out the garden serpent as Satan. Yet we do find allusions to the story itself.

Isaiah, for instance, makes reference to the curse found in Genesis 3:14 but seemingly regards the serpent as just another pest (Isaiah 65:25, cf. Micah 7:17, Josephus, A.J. 1:41-43, 150): “The wolf and the lamb shall feed together, the lion shall eat straw like the ox; but the serpent—its food shall be dust!”

Jesus quite possibly alludes to the wise (φρόνιμος) serpent (ὄφις) of Genesis 3 when he tells his disciples to be “wise as serpents” (φρόνιμοι ὡς οἱ ὄφεις) and “innocent as doves” (Matthew 10:16). It seems that Jesus took Genesis 3:1 (“Now the serpent was wiser than any other wild animal that the Lord God had made”) as simply zoological fact.

And Paul, for his part, acknowledges the story of the serpent twice but declines to mention Satan either time. He writes that Eve was “fooled” (ἐξαπατάω) by “the serpent” (2 Corinthians 11:3, cf. Epistle Diognetus 12) and that she was “deceived” (ἀπατάω) (1 Timothy 2:11).

As it stands, both Paul and Isaiah squander their chance to clarify the point.

Why have you tricked me?

Only in John’s Apocalypse then is a plausible identification of Satan with the garden serpent made. There Satan is “that ancient serpent… the one who deceives the whole world.”

While this description admittedly gets us very close to the events of Genesis 3, I think there is still reason to doubt that we are dealing with the same serpent. For one, there is a verbal distinction that needs to be noted: the garden serpent “deceives” (ἀπατάω) the woman while the serpent of Revelation “leads astray” (πλανάω) the world (LXX Genesis 3:13).

The contexts in which these words are used are different as well: in Revelation, on the one hand, Satan and his minions lead “the nations” astray so that they might diligently persecute God’s people in their pagan zealotry (Revelation 20:3-8, cf. 12:9-12, 13:13-15, 18:21-24). Having seduced and empowered the institutions of pagan empire, Satan uses his puppets to test and torment God’s saints at the point of an imperial sword. Daniel’s apocalyptic visions probably lie in the background here: through the agency of idolatrous kings and kingdoms, monstrous beasts wage war upon the saints of the most high (cf. Daniel 7-11).

In Genesis 3, on the other hand, the serpent deceives the woman in order to harm and outwit these supposedly higher beings (as is the case in the parallel story found in the Epic of Gilgamesh). Yet by tricking the woman the serpent inadvertently introduces unending struggle not merely into the lives of his opponents, but into the whole of Creation. The serpent too must suffer the consequences of his trickery.

Whatever can be made of the verbal incongruity (ἀπατάω vs. πλανάω) then, the Satan of Revelation and the serpent of Genesis are simply not engaged in the same kind of ploy.

By land or by sea?

I think there is another reason to question the conventional wisdom here. If we accept that the portrait of Satan on display in Revelation—not merely as a serpent but as a thrashing chaos-monster—originates (at least in part) in the Biblical legend of God’s primordial combat with Leviathan (cf. Isaiah 27:1), the trickster-snake of Eden becomes a less-than-compelling prototype. 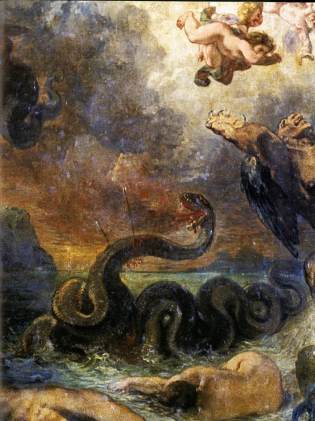 With all of this in mind, I think it is fair to conclude that Eden’s serpent and the Leviathan-type dragon of Revelation are different kinds of beasts altogether. Leviathan embodies the watery abyss with all its chaotic violence that threatens to smother God’s people (cf. Isaiah 51:9-10; Psalm 74:13-15); the garden serpent embodies the absurd and deceptive nature of reality. He is the trickster—that strange slither of fate—who brings humans to ruin just when they think they are invulnerable.

But even still, he’s probably just a snake.

6 thoughts on “Was Eve deceived by Satan?”