The New Perspective on Paul did not begin as a study of Paul but as a reevaluation of second temple Judaism. In an academy long dominated by Lutheran perceptions of Judaism, E. P. Sanders and others attempted to rehabilitate the Jewish religion of Paul’s day. On the backs of their success, scholars by in large no longer envision the Apostle as a Christian champion of love and faith over against a Judaism of works-righteousness and bigotry. This “Old Perspective” is now understood to be a fabrication, a polemic employed by “enlightened” Christians wishing to define themselves over and against “backwards” Jews.

These caricatured assumptions about Judaism do not affect the New Testament alone, however. As I will argue, the prophet Jonah is also a victim of Christian resentment of Judaism. Augustine and Luther both regarded Jonah as a representation of the envious and malicious Jewish people (Sherwood, A Biblical Texts and its Afterlives 25). And given the persistence of such readings, it is time for a New Perspective on Jonah. 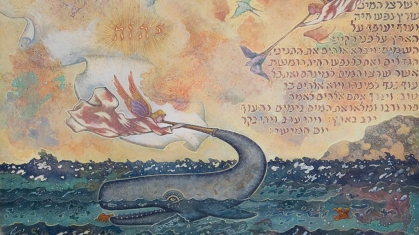 Jonah according to Christians

In popular Christian conception Jonah is the embodiment of what is wrong with Judaism. Jonah is selfish, nationalistic, and jealous. He flees God because he hates Nineveh. He bemoans God’s mercy for gentiles and resists God’s universalizing tendencies. In this way he exhibits most of the negative traits associated with Judaism by the Old Perspective. Jonah is, put simply, a perfect symbol of the Jewish obstinacy that opposed Paul’s mission to the gentiles.

Hand in hand with this negative Christian portrayal of Jonah is a positive portrayal of God in the book. God reprimands Jonah for his desire for judgement and nationalism. God tells a hardhearted Jonah to rejoice over the reversal of his prophecy of doom. The God of Jonah thus symbolizes a generous Christianity in its struggle with an unprincipled Judaism.

Jonah according to his first interpreters

Yet despite our certainty that this is who Jonah and God truly are in the book, early Jewish interpreters offer no such vision of the prophet. Jewish readers appear wholly unaware of what would become the Christian view.

What can we make of this? The first readers of Jonah saw the prophet as either a hero with a true (although postponed) message or as a man concerned firstly with his prophetic reputation. Jonah is nowhere reprimanded for begrudging God’s mercy or for a parochial disdain of gentiles. The popular modern interpretation that pits a Jewish Jonah against a Christian God is nowhere to be found.

What’s more, the interpretation of Jonah’s prophecy put forward by Josephus and Tobit which delays Nineveh’s coming doom complements the reading of God’s closing words that I defended in a previous post. There I considered the possibility that Jonah 4:10-11 represents a statement rather than a question. As a statement, God assures Jonah that he will not pity Nineveh—thus foreshadowing Nineveh’s destruction. The plant then serves as a symbol for the great pagan empire of Assyria. Just as it arose suddenly, so will it meet a sudden end: “You took pit on the plant… but I will not pity Nineveh…”

Besides the testimony of the book’s first readers, I think there is further evidence to support this reading.

Jonah the son of the truth

The first thing we are told about Jonah is that he is the son of Amittai (אֲמִתַּי), that is, the son of “truth.” Jonah’s concern for his namesake rises to the surface in the prophet’s complaint against God in chapter 4. Jonah quotes God’s self-revelation given at Sinai but makes one important substitution. Instead of “abundant in loving kindness and in truth/reliability” (וְרַב־חֶסֶד וֶאֱמֶֽת), Jonah says “abundant in loving kindness and changing your mind about calamity” (וְרַב־חֶסֶד וְנִחָם עַל־הָרָעָֽה). While this substitution is seldom mentioned, it is of great significance. For Jonah, the salvation of Nineveh proves that God is not true and dependable; God says one thing but does another. He is in fact not the God of the covenant, the God who “is not a human being, that he should lie, or a mortal, that he should change his mind” (וְיִתְנֶחָם). The God of the covenant, rather, is supposed to fulfill what he has spoken (Numbers 23:19). Jonah will not serve this counterfeit god.

As Jonah looks out over an untouched Nineveh he realizes his suspicions about God were true. God cannot be trusted to keep the word he gave to the prophet: “Forty days more and Nineveh will be overthrown.” In light of this Jonah becomes distraught. He claims this was the very reason he disobeyed from the beginning. He had attempted to escape God, first into Tarshish and later into death, because he believed God was unreliable—נֶחָם instead of אֱמֶֽת. Jonah the son of truth did not want to serve a God who was not himself true, nor a God who must turn back righteous judgement.

God’s final words to Jonah are thus not meant to criticize the prophet but to vindicate the reluctant servant. God tells Jonah that the prophetic announcement will be fulfilled, even if delayed. God will prove himself true to his word (אֱמֶֽת). He will not show mercy to Nineveh forever. Their sins will be punished.