Theological constructs, while often helpful, sometimes prevent us from hearing what Biblical texts have to say. This is certainly the case with scripture’s dual nativity stories. Two theological concerns in particular blur our reading of these stories.

Why then do we link Christmas and the incarnation so tightly? The answer is that the incarnation serves as the firm foundation upon which we have built two broad visions of salvation. According to one vision the perfect God-man paid for our sins as a sacrifice to God. According to the other, the perfect God-man revealed what had only before been shrouded; the true and loving nature of God. Having found one of these visions agreeable, we thus celebrate at Christmas either the birth of the sacrificial lamb or of the great teacher and revealer.

Still, Matthew and Luke do not seem troubled by the metaphysics of the incarnation as they tell their birth stories. They plainly labor toward other ends. For Luke, the virgin birth indicates that Jesus is “set-apart” and “the Son of God” (1:35, cf. Psalm 2). It is the child’s identity as the Messiah, the Davidic king (1:32), that Luke is particularly concerned with. His nativity songs speak of a king who will triumph over Israel’s enemies and raise up the righteous. Matthew too labors to show that Jesus is a king in the line of David—but perhaps more important for Matthew is Jesus’ typological role as a new Moses and new Israel.

There is one thread, however, that seems to bind Matthew’s nativity stories with John’s hymn of the incarnate logos: the angel’s announcement that Jesus will be called Immanuel, “God with us.” For Matthew, this allusion to Isaiah 7 imbues the virgin birth with its meaning (1:23). Through the birth of Jesus Isaiah’s prophecy, “God [is] with us,” comes to fruition. According to traditional readings, it is here that Matthew pays homage to John’s language of incarnation.

In the rest of this post I will consider whether or not the tradition read Matthew rightly. Has Matthew indeed taken up Isaiah 7:14 in order to establish a doctrine of incarnation? Or does the text function in some other way? We must begin again by reading Isaiah’s oracles in their 8th century context.

Isaiah appeared in Judah just prior to the desolation of Samaria by Assyrian armies. He announced that Israel’s God was about to judge even Judah by rousing Assyria. But through Isaiah’s prophetic word, God also offered to Judah a hope of salvation in the midst of the coming krisis. The oracles contained in Isaiah 7-12 all function in this context of Assyrian threat, the birth of Immanuel included.

Like other symbolically-named children in this prophetic cycle, Immanuel is said to be a “sign” and “portent” for Judah (Isaiah 7:14, 8:18). Isaiah claims the child’s birth points to a number of looming historical events. Firstly, the anti-Assyrian Aram-Israelite coalition against Judah will fail (7:16, cf. 2 Kings 16:5). Secondly, God will subsequently use Assyria to judge Judah (7:17-8:15). And thirdly, as is disclosed in chapters 9-12, God will annihilate Assyria and exalt the righteous remnant of Judah. The birth of Immanuel thus puts into motion a familiar historical pattern: God will judge his people, make his name known among the nations, and redeem a faithful remnant. God will prove that “God is with [his people]” when he acts to direct history and reconstitute Judah. For Isaiah all of this would occur on the historical-political stage of the 8th century Near East. 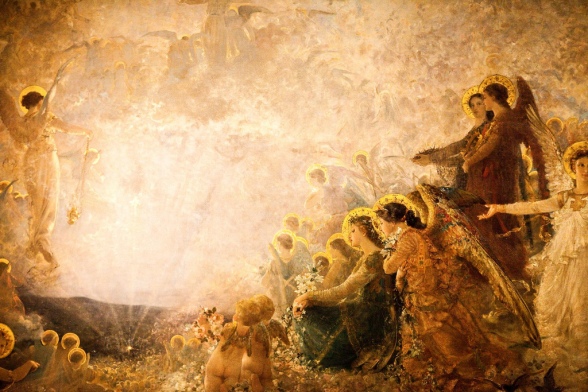 Despite the foregoing context, Christians have traditionally insisted that in its truest sense Isaiah 7:14 is a prophesy about the incarnation, not a prophetic announcement of God’s action in history. For Christian interpreters then, Matthew’s Immanuel child is himself God’s presence in Israel. The child is no longer a sign of God’s presence in the movements of impending history. Thus, according to this reading, Isaiah’s historical/prophetic concerns have given way to the theological/metaphysical concerns of the early Christians.

Considered on historical-grammatical grounds though, this traditional reading implicates Matthew in serious misinterpretation. The issue of timing aside (8th century vs 1st century), Matthew has taken what was a prophetic announcement of God’s intention to judge and save ancient Judah in the presence of pagan empire and transformed it into a prediction of the incarnation. Matthew has wrest the text from the prophet, emptied it of its message, and refilled it with another. In sum, Matthew has disregarded any and all rules of interpretation.

This leaves two questions. First, is there a better way to understand Matthew’s reading of scripture? And second, is it possible that Matthew did understand the original message of Isaiah 7-12? I would argued the answer is yes on both counts.

In my view Matthew appropriated Isaiah’s Immanuel prophecy because he drew a typological connection between the 8th century and the 1st. For Matthew, as for Isaiah, Immanuel’s birth functioned as a prophetic sign of future events. I will draw out these parallels more fully below.

When we take Matthew’s narrative as a whole we are pressed towards this prophetic schema rather than towards a metaphysical schema. Matthew’s Jesus is everywhere concerned with the future, not with the incarnation or the nature of God. Matthew’s Jesus positions himself at time’s edge, promising reward, warning of punishment, and inaugurating God’s reign over the nations. He is, after all, a prophet. Accordingly, for Matthew the birth of Immanuel functioned firstly as a prophetic sign. God was about to once again judge Israel by means of pagan armies and through that judgement save his holy ones. The God of the Exodus and Conquest would judge his people, defeat his enemies, and exalt the faithful on the world stage. In this God would prove himself present with his people to both judge and save. Isaiah’s meaning and Matthew’s meaning then do not sit in tension but in typological relation.

If we take seriously Jesus’ insistence that this judgement and salvation was at hand, the war with Rome in AD 70 and the replacement of Greco-Roman paganism with Christendom in the centuries that followed match well onto the pattern provided by Isaiah 7-12. As in the 8th century, God was about to judge his people by means of a pagan empire. God would then judge the pagans and exalt his beleaguered people over the nations.

10 thoughts on “Immanuel: theology or history?”