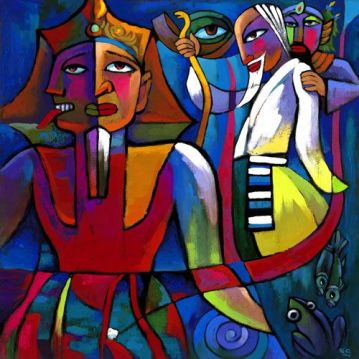 God’s treatment of Pharaoh in the Exodus narrative consistently puzzles readers. Just when Pharaoh has agreed to let the Israelites go, God hardens his heart and drives him to the shore of the Sea. God does this so that he can work signs of judgement against Egypt.

I will harden Pharaoh’s heart, and I will multiply my signs and wonders in the land of Egypt. When Pharaoh does not listen to you, I will lay my hand upon Egypt and bring my people the Israelites, company by company, out of the land of Egypt by great acts of judgment. The Egyptians shall know that I am the Lord, when I stretch out my hand against Egypt and bring the Israelites out from among them. (Exodus 7:3-4)

I will harden Pharaoh’s heart, and he will pursue them, and I will get glory over Pharaoh and all his host, and the Egyptians shall know that I am the LORD. (14:4)

God corrupts the faculties of Israel’s enemies in Deuteronomy 2:30 as well. He does this to clear the Promised Land.

This kind of divine working is not confined to the Old Testament. God’s blinding light strikes at the heart of the gospel story as well (John 9:39). This is most clear in Jesus’ parables. Mark quotes the prophetic commissioning of Isaiah in order to explain Jesus’ cryptic story-speech.

For those outside, everything comes in parables; in order that

Our familiarity with the moralistic and relatively straightforward Lukan parables (The Prodigal Son, The Good Samaritan, The Tax Collector and the Pharisee) obscures the distinct Markan and Matthean  conception of Jesus’ parables. For Mark and Matthew, the parables in themselves represent acts of divine judgement against a disobedient Israel. They are not intended to teach — they are intended to elicit misunderstanding, rejection, and finally divine condemnation. Jesus, like Isaiah, becomes the agent of God’s wrath against His people. His ministry will result as did Isaiah’s — in political catastrophe.

Then I said, “How long, O Lord?” And he said:
“Until cities lie waste
without inhabitant,
and houses without people,
and the land is utterly desolate;
until the Lord sends everyone far away,
and vast is the emptiness in the midst of the land.” (Isaiah 6:11-12)

Jesus is thus a prophet sent to a people who stand already condemned. Such a characterization of Jesus’ prophetic role undoubtedly arises out of knowledge of its ultimate results: the last prophet of God was murdered and as a result Second Temple Judaism was washed away by a divine flood.

Jesus’ prophetic mission in the spirit of Isaiah stands in the background of his parable about the fig tree. The parable is told in two parts as it is interrupted by Jesus’ action in the Temple. When Jesus finds no figs on the tree (because it was out of season), he curses it. Jesus then enters the Temple and when he sees that it is being run by thieves, he curses it too. He acts out the violence that will soon come upon Jerusalem. When Jesus returns to the fig tree, it is withered away. The immediate withering of the fig tree thus allows us to glimpse the fate of the Temple some forty years later.

The cursing of the fig tree in this way becomes intelligible. Just as Jesus was sent to a people cursed under the terms of their Covenant, so too did Jesus find a fig tree that could not conceivably produce fruit. The inability of a tree to bear fruit out of season is analogous to Israel’s inability to perform the works that make for peace. Israel’s heart had, through a tireless habitual recalcitrant disobedience, been hardened by God. According to Paul, their stumbling caused the nations to turn from idols to serve the living and true God (1 Thessalonians 1:9).